Where do Scottish Folds come from?

The first Scottish fold appeared on a farm near Coupar Angus, Scotland,  in 1961. A local shepherd noticed that Susie, a shorthaired white cat had strangely folded ears and it is from this Susie that all Folds today can trace their heritage.

The ears fold through a spontaneous and inheritable defect in the mesoderm. This changed gene whilst dominant is an incomplete dominant i.e. it has to be present in one parent for the offspring to have folded ears.

The Scottish Fold is matched with a distinctive “look” and personality. When you think about a Fold think Round, the head, eyes, and muzzle should be round. The body should be medium with a medium to long tail but in proportion to the body. The tail should be flexible and tapering. The coat should be dense, plush medium soft.

Its crowning glory, the Scottish Fold’s ears, come in all degrees of folds ranging from medium-sized “perk” ears to the cherished small, tightly folded ear. The Fold may have either a long or short coat and can be bred in over 40 different colors the same as the British Shorthair.

Their large round eyes and folded ears, coupled with expressive looks, intelligence, and inquisitive nature make them a wonderful extension to the family home. 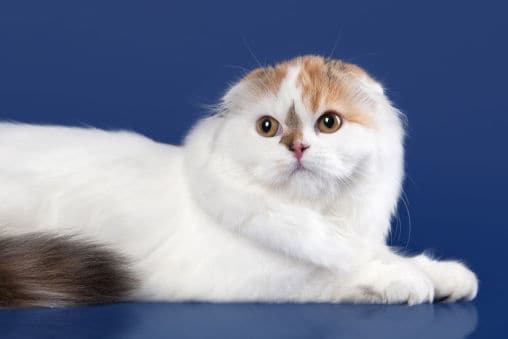 The kittens are not born with folded ears and not all kittens’ ears will fold. The kittens with pert ears are called Scottish Shorthairs. The kittens that carry the gene will start to fold at 2-3 weeks. The folding process begins to crimp at the outer edge of the ear, then gradually tightens and the tips fold down into the head, giving the appearance of the ears sliding off the top of the head.

They require minimal care to maintain health and vigor. They are a treasure to own and will provide the family with lots of love and entertainment for many years.

What to buy the Scottish Fold lover who has everything? If the amazing cat bubble backpack is not up their alley and they are not big on cat jewelry, here are some breed specific gift ideas that might do the trick.